The Ends Don’t Justify the Means.

Posted on February 3, 2017 by DocStephens

It’s a simple idea and it’s been with me all my life. I’m not sure when I first heard it. It was before I understood its profound meaning. My parents and grandparents repeated it often to me and my sisters when we were children. Teachers reminded us about it from my earliest schooling experience. I’ve heard it so often, I don’t remember its origin. It’s ingrained. It’s one of those notions we might call a universal principle as it should apply across all cultures.

I had an epiphany, a new understanding of this old idea. It was January 20, 2017, Inauguration Day in the United States. A day we peacefully transfer our government’s executive branch from one steward to another. About half of the US population did not support the person who was about to take the oath of office to become our President for the coming quadrennial. This is not a new circumstance. The same could be said four, eight, twelve, sixteen years ago, and many inaugurations before that. We attach great importance to the Presidency of this republic. 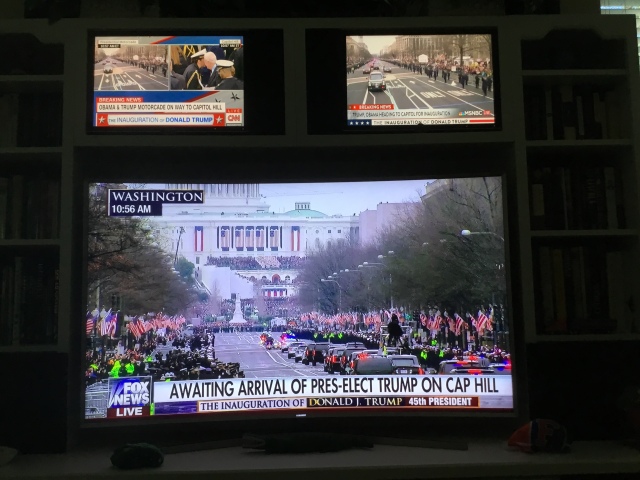 It came to me as I observed the violence on that day, that many of my fellow citizens never learned that the ends do not justify the means. Another possibility is that they learned it, but were so emotionally hijacked that they’d lost all ability to reason. It was obvious to any observer that countless people felt justified to commit bizarre acts of violence and destruction in violation of laws and morality. I kept thinking to myself, how can they justify their behavior. The answer, they believe their goal is the justification.

Admittedly, some were peaceful protesters who just wanted the world to know they didn’t approve of the incoming administration. That’s fine, it is their God given right to express themselves peacefully if they don’t deprive others of their constitutionally guaranteed rights in the process.

It was sad to see some of the protesters as they were interviewed by the intrepid reporters mingling among them. It was clear that many of them could not explain their motivation. They were just angry. Again, this is understandable and expected after a political contest where both sides are demonizing the other without much restraint or conscience. Does this justify burning someone’s car? Does this justify destroying someone’s business establishment? Does this justify injuring another person, or worse.

I was struck by the way the different networks covered inauguration day. CNN, MSNBC, and others decided to focus their coverage more on the protesters and the rioters than other networks that chose to cover the Inauguration more extensively. No problem! Each media outlet is entitled to their editorial perspective. Freedom of the press is another right that is guaranteed by the Constitution.

Fast forward to February 1st and head west to Berkeley. Some students at the University of California don’t agree with Milo Yiannopoulos, an author and editor of Brietbart news organization. They are angry that he was invited to speak at the University by a group of Republican students. The University says it is prepared for protesters, but an hour before the speech is to commence, violence breaks out, and the protest is now a full-scale riot. The speech is cancelled and the speaker is removed from the University to safety. The protesters and the rioters obviously had a couple of goals in mind. Stop Milo from speaking to other students who invited him to the campus, and send a message to anyone who has an interest or sympathy with Milo or Brietbart, they are not allowed on this campus. Any means to that end was justified in their minds, including, intimidating and assaulting people who wanted to hear the speaker and destroying personal and university property.

These people would use any means to achieve their desired outcomes. I cannot imagine the horrific consequences if the speaker had been allowed to continue with his presentation as planned.

Following my epiphany, I’ve realized countless examples where people act in a manner they justify because they are convinced their goal is worthy. Consider the extremists who flew airplanes into the World Trade Center, the Pentagon, and a field in Pennsylvania. Only God knows what other ends they intended to achieve without concern for human life. These people never learned the lesson.

Consider the thousands of angry women who gathered the day after the inauguration across the country and around the world.  I’m not referring to those peacefully protesting the new president or any number of other causes they deem honorable. I’m talking about the ones that justify taking the life of an innocent human for no other reason than they can’t be bothered to have a child of their own. I don’t think these people learned that the ends don’t justify the means.

Then we have elected representatives who boycott senate hearings to prevent an outcome they don’t like. Boycotting is certainly an expression protected by the Constitution, but character assassination to destroy the reputation of another human being is not.

Speaking of character assassination, what about calling someone a denier of science just because the person embraces different scientific ideas. It has become a common practice to discredit legitimate scientists who come to conclusions about their science that differ from the ideas of the bullies. These ad hominem attacks go far beyond the scientific community. The goal is to shut down debate. Any means to that end is justified, including distorting the science.

Since my epiphany, it has dawned on me that virtually all criminal activity from thievery to murder, in fact most if not all uncivilized behaviors are justified solely by the desired outcome. Didn’t these people learn the ends don’t justify the means. Apparently not. It’s time for some education.