Up is Down and Down is up: Opinions, Facts, and Truths

Two scientists walked into a bar. The bartender looked at them and asked, “What’s up?” One of the scientists pointed out the front door while the other one pointed at the ceiling. The bartender being a curious fellow wondered which one was telling the truth.

Before I share the punchline, let’s digress and ponder the meaning of the word “truth”. Like most words, there are several definitions. My Merriam-Webster app gives nine definitions, but three are pertinent for my purposes.

Now back to the bar. The scientist who pointed at the ceiling is obviously telling the truth because just about everyone agrees that “up” is in the direction of the ceiling. The scientist who pointed at the door is also telling the truth because she knew that door was on the north side of the bar.  Almost everyone agrees that pointing north, in the northern hemisphere at least, means you are pointing up north, so to speak. (If you hold a map so that north is on the top of the map, then north is up.)

Now the bartender who is both curious and enlightened, realizes that there can be more than one truthful answer to the same question. In fact, it happens all the time. In the case of “what’s up?” the number of truthful answers is infinite because “up” is a relative term that depends entirely upon how you define “down.” Just ask a space walker floating in intergalactic space. She might point to her feet as down, or above her head as up. She might point to the black hole she’s orbiting and say that’s down the gravity well. In other words, she needs a frame of reference, a definition. Before she can point to the direction that is truly “up”, by the third definition above, she needs to know what you mean by “up”.

I once had a boss who taught us that to settle an argument usually required two things, defining terms and taking measurements. He also taught us that “truth” by the third definition is not the same as an “opinion” no matter how sincere or widely held that opinion might be. This is important! Sometimes, it is a matter of life and death!

Now to the punchline, but it’s no joke.  We have a major problem in our country. People are pointing in opposite directions and arguing about who’s telling the truth. No one is defining their terms. No one is agreeing on how to decide what is reality. It is obvious the two sides just want to argue. It’s like two football teams that want to play ball, but each team plays by their own set of rules. One team is counting yards gained, the other team is counting the number of offensive plays. Neither team is paying attention to the score on the scoreboard. This game isn’t going to end well. 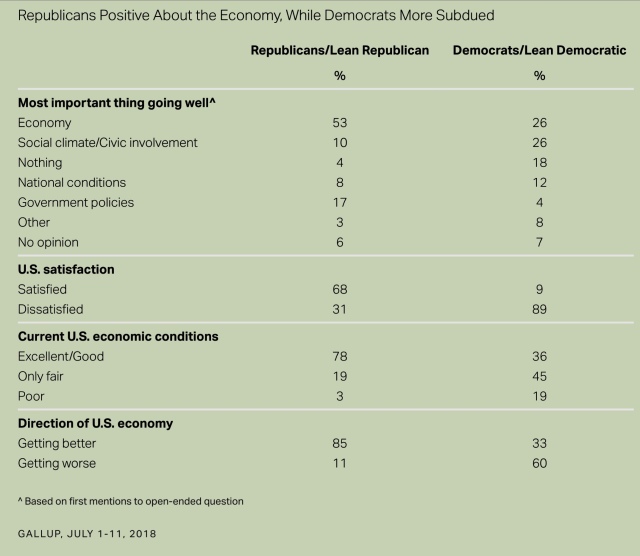 We should agree that both groups of respondents were truthful by the first two definitions of truth. They answered sincerely and seemed to believe what they say.  Likewise, both the Democrat and Republican leaning respondents expressed opinions that are widely held among their fellow partisans. These first two definitions of truth get us nowhere! All we have is two figuratively angry mobs yelling different opinions at each other, neither willing to accept the possibility they might be wrong by that inconvenient but essential third definition of truth.

This is precisely where our free press is supposed to help us, but they’ve chosen partisan sides just like the rest of us.  We have the Democrat leaning free press and the Republican leaning free press. Neither expresses the slightest interest in exploring answers that are in accord with reality, the third definition of truth. Here is what they should do.

The responsible journalist should begin by separating the questions. The first question wondered if the economy was closer to poor or to excellent? The second question inquired about the direction the economy is moving, toward excellence or getting worse. Competent journalists should then define the terms of the questions. In other words. What is an excellent economy? Similarly, what is a poor economy? Economists could easily provide such definitions in ways that can be measured and compared. It would be helpful to get agreement about the most relevant dimensions of an economy such as unemployment rates, GDP growth rates, stock market valuation, debts and deficits, inflation rates, levels of poverty or affluence, home ownership, loan default rates, etc. The number of possible dimensions is nearly endless, but a significant subset should suffice to answer our two questions and determine the truth by the third and most important definition.

For the sake of argument, lets assume that most economists agree on a set of key dimensions of a national economy. Furthermore, they define and quantify the state of each dimension. The economists can establish standards based on historical information. For example, unemployment rates historically range from lows near 3 percent to highs in the upper teens. Generally, the lower the better. They could establish a standard (frame of reference) by which this dimension is considered indicative of a good or excellent economy or otherwise, fair or poor. This could be quantified in such a way that we could say whether the unemployment rate is significantly above or below that standard. This could then be done for each of the other dimension of an economy like GDP growth rates, inflation, etc. Combining the metrics statistically into one overall indicator and tracking it over time would determine if the economy is getting better or worse in accordance with reality.

This is what journalists should do. Unfortunately, most don’t. They rage on just like the partisans, and we get nowhere. In fact, our social fabric gets ripped apart. We need to hold our news media to be accountable to all of us. They represent us.  This is why we want a truly free press that is our head referee.  We want a free press that knows exactly what’s up!