Finding Explanations in the Game of Life

Those who know me understand my passion, perhaps a pathology, for sports and particularly for my teams.  One of the many reasons I love my wife derives from her tolerance for this among many peccadillos.  Sporting events, and entire seasons, can be allegorical of larger life issues and the human condition.  We are not a highly evolved species, but we continue to evolve.  The game and all that surrounds it, illustrates this almost perfectly.

Last night, a young college football player made a mistake that rather obviously cost his team, and all of the fans of his team, the satisfaction of an important win.  Instead, the other team celebrated their hard earned victory.  After the game, the internet, the sports pundits, and the fans exploded with rage aimed at the stupidity of this one player and his most egregious lapse.  It was a monumental mistake that possibly cost his team a spot in the national championship playoffs.  His university could lose substantial revenues because of his error in judgement.  The wrath of the football world came down hard on this unfortunate soul who committed a foolish act in front of millions of viewers on television. 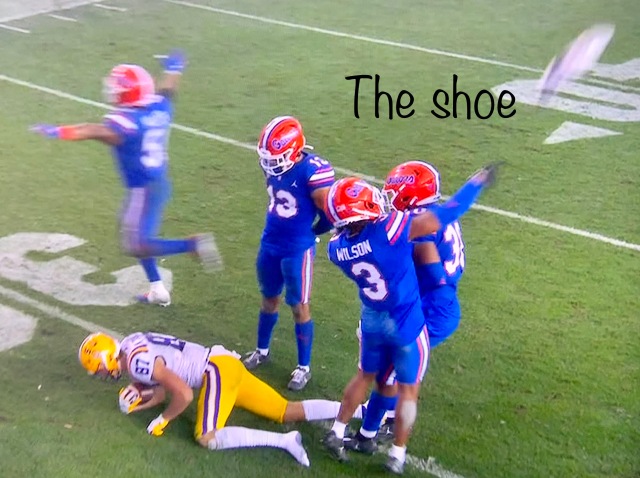 What did this kid do?  He threw a shoe about 20 yards!  The yellow flags went higher and farther.  Too bad it was after he and his defensive teammates had stopped their opponent on third down forcing a punt with the game tied 34-34 and less than two minutes remaining in the game.  No one will ever know what might have happened if he hadn’t thrown the shoe.  He ripped it off the foot of the receiver he was covering who failed to make a first down.  Unsportsmanlike penalty, 15 yards, first down!  At least 99.995 percent of the people watching the game or hearing about the penalty, agreed.  How convenient it is to have one obvious act by one flawed human being provide an explanation for why the Gators lost the game. And therein lies a lesson for us all.

Why do we look for a simple explanation for complex outcomes?  Take this game for instance.  What if the Gators had made a first down or a touchdown on their previous drive instead of settling for the tie with a field goal?  Couldn’t we blame someone for that?  How about the other kid who didn’t catch the pass that would have maintained possession for the Gators?  There were more than 150 plays in the game and about half of them occurred under a dense fog that fell over the field on this dark December night in North Florida.  The star quarterback threw two interceptions and fumbled once.  Another defensive back missed an assignment that allowed an LSU receiver to strut into the endzone untouched.  Coaches called plays or players failed to execute them with bad results preventing scores for their team or allowing scores for their opponent.  The shoe was only one act at the end of a countless number of acts followed by other acts and decisions, all leading to the final outcome, a 37 to 34 victory for one team and a 34 to 37 loss for the other.   Importantly to my point, we have a convenient and beautifully simple answer for why our team lost.  The kid threw a shoe 20 yards.  Off with his head!

It’s human nature to search for explanations.  Finding one that explains everything is golden. We do this all the time. How fortunate to have a scapegoat to focus our emotions?  How satisfying to have one easily identified cause?  Someone to blame.  In reality, outcomes have seemingly infinite causes.  Many can share the blame, and scapegoats have fellow enablers who may be overlooked in our zeal to target the one most guilty party.

This innate tendency to oversimplify represents a human weakness.  It’s built into our language, all languages.  One word stereotypes an entire population.  One adjective describes a person.  One tweet ends a career.  One mindless act can end a life or many lives.  In a game of football, one bonehead mistake produces an outcome that is insignificant in the grand scheme of things.  There will be another game.  There will be another season, there will be other players, other coaches, other teams, other games, and other fans.  Is it different in the game of life?

Now I should find a single word or perhaps a succinct phrase that sums up this human failing, this tendency to oversimplify complex events, diverse populations, and complicated people.  How about I just say we are not yet a highly evolved species, and that ends the discussion.