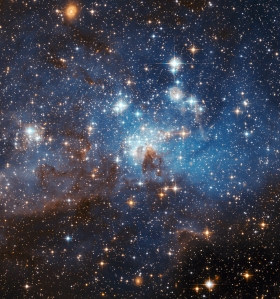 There exists a profound tension between the incomprehensible complexity of our universe and our inclination to simplify what we observe in order to afford us a practical understanding.  The consequence of this tension is belief.  Our lives as individuals, the continuing prosperity of societies, the very survival of homo sapiens, and the future of life on this planet depends upon these notions and emotions that constitute our beliefs.

Because we can never know everything about anything, we naturally consider what we do know or feel, and we act in accordance with our beliefs.  Often, life goes on and all is well.  Unfortunately, sometimes we screw up, big-time!  With more than six billion people thinking, feeling, believing, acting, propagating, and more than occasionally screwing up, this incomprehensible complexity of our universe can bite us on the proverbial derriere.

In 1938, Enrico Fermi won the Nobel Prize in Physics for his work in nuclear science which included his demonstrations of the existence of new radioactive elements produced by neutron irradiation, and for his related discovery of nuclear reactions brought about by slow neutrons.  If you would like to be convinced about the incomprehensible complexity of our universe, try reading some of his papers or just go to Wikipedia and read about his work.  My point?  He would be considered an intelligent person by most of us.

Fermi wondered why scientists failed to find evidence of intelligent life elsewhere in the universe.  With billions of stars in the Milky Way and an uncountable number of other galaxies existing over a time span of many billions of years, why does it appear that we are alone?  Or as a corollary to this question, where is everyone else?  These questions form the Fermi Paradox, and many wise people have failed to offer an acceptable answer, a plausible hypothesis, or even a simplistic belief.

One popular explanation suggests that modern civilizations “screw up big-time” before they solve the complex problems of interstellar communication or transportation that would let others in the universe know of their existence.  As a scientist, Fermi certainly wondered about the future of our world once the nuclear genie was out of the bottle, and he had something to do with letting her loose.

Geologists tell us that our planet is 4.6 billion years old.  Anthropologists suggest that modern humans hunted and gathered for perhaps 200 thousand years before civilization dawned after the continental glaciers retreated only 12 thousand years ago.  Modern technology and the industrialization of that civilization occurred in the last two centuries, but the nuclear genie leaked out of the lamp a mere lifetime ago, and it’s powerful vapors are just now spreading into the hills and valleys of the far corners of our globe.

If the age of the Earth were presented in a 1000 page book, modern human would not be mentioned until you reach the epilog, more than half way down the last page.  All of the history of civilization would be in the last word of the last sentence, and modern technology would reside in the period at the end of the book.  The nuclear genie would be but a pixel.

I wonder if there will be a sequel to this book.  That, of course, will depend upon whether we close the enormous gap between our knowledge and our beliefs, or whether we are able to tame our tendency to simplify.  When arrogance and ignorance collide, worlds end.

Retired college professor of science and mathematics, academic administrator, and president (emeritus).
View all posts by DocStephens →
This entry was posted in Astronomy, Human Behavior, Musings and tagged Fermi Paradox. Bookmark the permalink.

1 Response to Complexity, Simplicity, and Belief